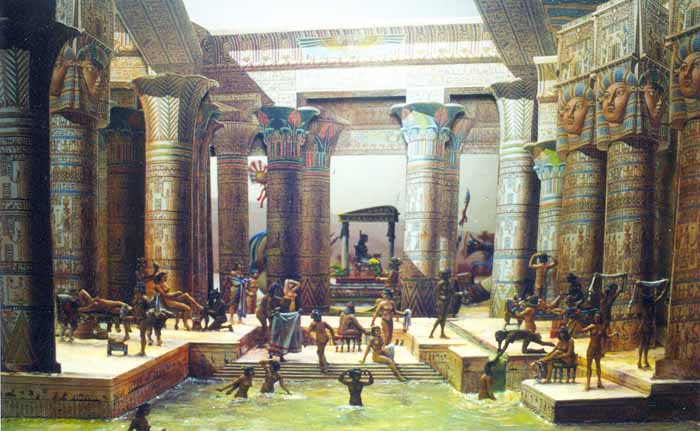 Egyptian Bath – nice, but where are the rubber duckies?

Here’s the latest in the enthralling HISTORY OF BATHING series by The Bath Tub Diva!

When last we left off we were in Rome and the grand baths were called “Thermae”. For this episode, we’ll be going a bit backwards to ancient Eqypt (Cue Bangles “Walk Like an Egyptian”).

Dating as far back as 2000 BC, ancient Egyptians were amongst the first to widely adopt the power of the hot tub for its therapeutic values. These hot tubs consisted of a water-filled caldera that was then heated by placing red-hot stones in the water.

Due to the climate, (remember, we are in Egypt where it’s hot hot hot) Egyptians were fixated on cleanliness, often bathing up to 4 times a day. Even the Diva, who loves to bathe as often as possible thinks that’s a wee bit excessive.

Men and woman shaved and plucked off all of their body hair using tweezers, knives and razors, made of flint or metal – phew! this would be a full time job because once you got to the end of your body, hair would have grown in at the beginning again. Not only was this for the ideal of beauty at the time, but it also rid the Egyptians of body lice. Ewwwwwwwww!

To clean themselves while bathing, the Egyptians used natron – a soda ash that when blended with oil made soap. Natron was also used when mummifying the dead – another ewwwwww.  The rich had bathing facilities in their places of residence while everyone else bathed in the Nile.

The homes of the wealthy were airy and roomy. There were bedrooms, servant’s quarters, halls, dining rooms – and BATHROOMS! Actually, a “bathroom” was usually a small recessed room with a square slab of limestone in the corner. There the master of the house stood or sat while his servants liberally doused him with water. Well, we can’t really call that a “bath” now can we? That is a “shower”. However, there is evidence from excavating that there were wonderful large public bath houses with showers, stone basins and stoves to heat the hot water.

Egyptians loved bathing with essential oils and flower oils – because they were no fools and understood the power of aromatherapy!

Of course, you can’t talk about Egyptian baths without mentioning Cleopatra, the last pharaoh of Ancient Egypt. She was renowned throughout history for her radiant skin and her stunning beauty. To keep her skin soft and beautiful she was said to bathe in milk. However, Cleopatra didn’t bathe in cow’s milk, nope, the milk for her legendary baths was instead provided by donkeys. She might have had up to 700 lactating donkeys at time to keep her in milk baths. There are a number of rude ass jokes I can make about that, but I shall restrain myself…

Here’s a nice recipe for a modern day milk bath where you don’t have to round up a bunch of donkeys to fill the tub. Milk & Honey Bath Recipe.

The 1% bathing in ancient Eqypt…

Thanks to these resources for this article:
Bull Frog Spas
The Keep
The Plumber